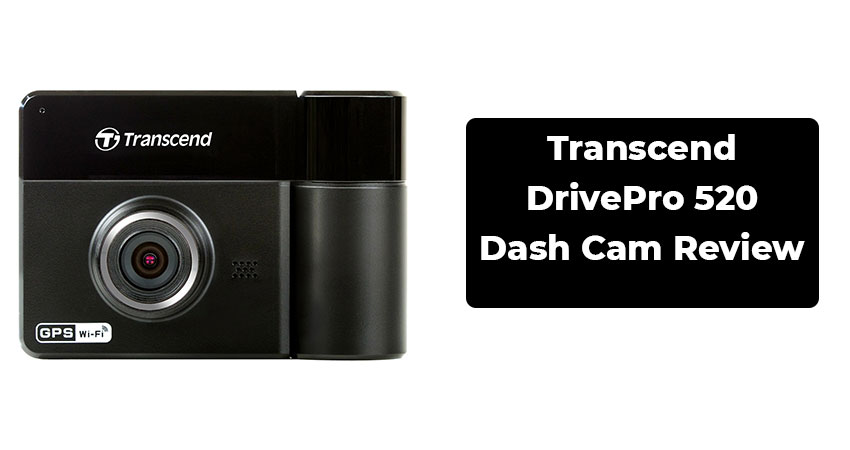 Twin Cameras: The Transcend DrivePro 520 Dash Cam elevates vehicle safety with its seamless integration of dual cameras. The DrivePro™ 520’s frame fits two cameras, one front-facing camera and a rear 180° rotating camera, giving drivers ultimate protection and complete coverage while on the road. Both cameras employ six glass lenses and a CMOS sensor delivering remarkable visual clarity, especially during daytime driving. The front camera has a wide 130° angle lens with an F1.8 aperture, letting in plenty of light and and automatically adjusting to changing light conditions. This camera records in Full HD, 1080p at 30fps. The rear camera is intended for in-vehicle recording purposes, engineered for those driving “in the field,” such as taxi and private hire drivers. This camera has an F2.8 aperture, 110° field of view and records in HD, or 720p at 30fps. It employs four IR LEDs, boosting the camera’s ability to record in virtually no light, recording details of passengers and their actions as added protection for drivers on the clock.

IR LEDs: Infrared LEDs record in virtually no light. While the Transcend DrivePro 520 Dash Cam does not include night vision, the rear camera integrates the power of four infrared LEDs for solid in-cabin recording in near darkness. The IR LEDs automatically turn on when the camera detects that there is not enough light to effectively record. Note: Recorded IR footage is always in grayscale.

GPS Tracking: GPS functionality is built into the dash cam and can be switched between GPS and GLONASS navigation systems in the menu. Within the span of a quick 15-20 seconds, the GPS locates drivers and automatically sets the date/time stamp to log travel activity. The GPS system stores current and past travel routes as well as displays maps for navigation. If an accident occurs, drivers can relay their exact coordinates to the police and emergency response providers.

Emergency Recording: Emergency recording is triggered when the 3-axis G-sensor detects a sudden bump or severe impact. Footage recorded in this mode is saved as an overwrite protected file until further analysis. In the menu settings, the G-sensor’s sensitivity levels can be adjusted—particularly convenient for those with bumpy roads as a regular part of their commute.

Emergency Button: The Transcend DrivePro 520 Dash Cam features an on-device emergency button that can be manually activated by drivers, recording activity in-cabin or outside the vehicle. The button serves as another measure and means of capturing evidence, safeguarding those driving in the field from potential false claims or lawsuits while on the job. The emergency button records either video or takes still images. Files manually recorded by pressing the emergency button are saved as a locked, overwrite the protected file.

Wi-Fi Enabled: Using the Transcend’s DrivePro™ New App, Wi-Fi allows drivers to instantly upload and share recorded footage from an accident or false accusation made by customers with the police and insurers. Note: The app is compatible with Android and iOS smartphones and tablets only.

Snapshot Mode: The included Li-polymer battery is a dedicated backup source for recording should vehicles lose power. The battery powers the DrivePro™ 520 during Snapshot Mode, permitting users to remove the dash cam from its mount and take pictures in the case of an accident as a supplemental form of evidence. Snapshot Mode can even take stills while the dash cam is recording video, storing images as a separate file. The front camera boasts three megapixels of resolution, while the rear has one megapixel. Use the Wi-Fi capability and instantly send these images to police and insurers directly from the dash cam.

Auto Power On/Off: Smart technology prevents draining of the vehicle and DrivePro™ 520’s battery. With auto on/off functionality, the dash cam instantly powers on or off once it detects the vehicle’s power source with a simple twist of the key or push of the ignition button.

Transcend Software: Transcend’s DrivePro™ New App and DrivePro™ Toolbox contribute user-friendly platforms for streaming, reviewing, downloading/uploading and sharing recorded video and photos from mobile devices and computers. The mobile app supports live streaming of video from the dash cam, as well as downloading and instantly sharing video with the police and insurers in the case of an accident using Android and iOs devices. The DrivePro™ Toolbox is intended for reviewing footage on computers and is compatible with both PCs and Macs. With the Toolbox, users can review detailed trip summaries, including GPS coordinates (or Grass, the Russian satellite system) and travel speeds. The footage is organized and easily located within the software according to date and time stamps.

LED Screen: The Transcend DrivePro 520 Dash Cam includes a large 6 cm display screen. Brightness and clarity of the LED screen reduce eye strain when using the GPS or reviewing footage in playback. Drivers can make several selections to what is on the screen, alternating between front camera, rear camera or a split screen showing live visual feeds from both cameras. Additionally, the screen can be blacked out after one, three or five minutes of inactivity for distraction-free driving at night.

***credit to Michael Kwan channel for this video***

***credit to Michael Kwan channel for this video***

The Transcend DrivePro 520 Dash Cam pairs front and rear recording capability for impressive visual coverage on the road and inside vehicles. The DrivePro™ 520 combines a powerful front lens that lets in plenty of light for optimized recording with fine detailing. At night, the front camera produces satisfying images, with minor halos around streetlamps and headlights. Footage from night recording appears slightly saturated due to an automatic post-production filter. The rear camera employs innovate IR diodes for superior recording in virtually no light. Both lenses are made from six layers of glass, enhancing details and textures. Transcend packs their dash cam with a host of popular features, including Wi-Fi, Live Feed, connection with their proprietary mobile app and plenty of customization options to settings. Its slightly larger footprint may be distracting to the average driver, but nothing too overwhelming.

Overall, the Transcend DrivePro 520 Dash Camera is a quality product guaranteed to perform reliably and is a must-have addition for those driving professionally. Its 180° rear rotating camera is optimally suited for recording in-cabin activity. Integration of dual channels safeguards drivers in the field from any roadside hazard as well as potential false claims and lawsuits brought on by passengers. While on the higher-end of the dash cam spectrum, the DrivePro™ 520 is a worthwhile business and safety investment, claiming its spot in our Best Front and Rear Dash Cam List.

If you enjoyed our Transcend DrivePro 520 dash cam review, be sure to check out more Transcend reviews.