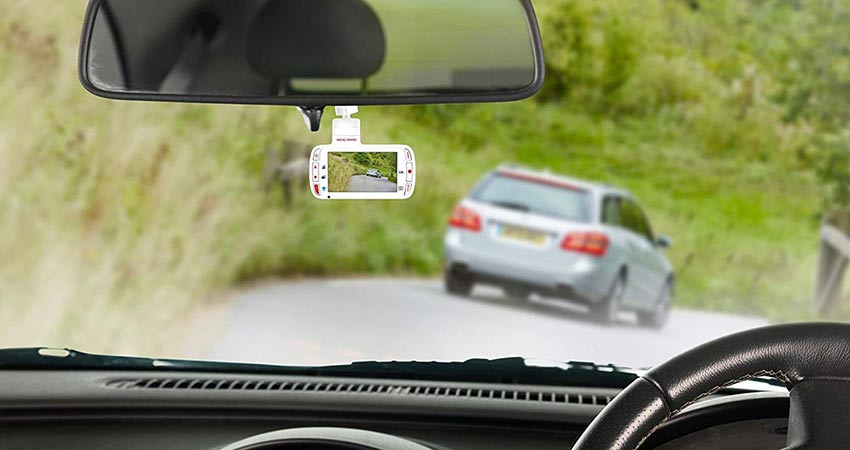 Built-in GPS: The GPS sensor records driver speed and location data from trips. When footage is played back on a computer, routes can be tracked with Google Maps™. If an accident occurs, drivers can provide police and insurers detailed information for reports and claims.

G-Force Sensor: When an event occurs, the G-Force sensor is activated and automatically triggers Emergency Recording. All footage from before, during and after an impact or collision is auto-recorded in an overwrite protected file for later review and analysis. In addition to Emergency Recording, the sensor detects if drivers yawed, braked, as well as accurately gauges the force of impact.

Parking Mode: Parking Mode utilizes built-in motion detection technology to automatically activate recording when sensors pick up activity or impact in front of the vehicle even when a driver isn’t present. This feature is particularly useful as evidence in the event of vandalism, or collision while the vehicle is parked and left unattended.

Photo Mode: In the event of an accident, drivers can remove the dashcam from its magnetic mount and use it as a standard digital camera, documenting damage to vehicles as evidence for police and insurers.

Wi-Fi: With the integration of Wi-Fi, drivers can instantly download footage of trips to Android/iOS smartphones and portable devices, or share them with their social networks. In the case of an accident, instantly share video with the police and insurers-indispensable evidence when filing tedious reports and claims.

World’s First Magnetic Car Mounting System: Not only is this Nextbase’s first magnetic-powered in-vehicle mounting system, but it is also the first in its class. Pioneering a new wave of dash camera mounts in the UK, the 312GW attaches magnetically to its bracket offering hassle-free securement and removal of the camera.

Large LCD Display: Playback footage directly on the camera without straining eyes. At nearly 7 cm, the LCD screen is noticeably larger than average dash cams available on the UK market.

***credit to Drivn channel for this video***

***credit to Peter Allan Jones channel for this video***

Nextbase even steps up their game with the addition of Wi-Fi (a feature absent in much of their product lineup), equipping drivers with instant capability to send recorded footage of accidents to the police, insurers or even share with their social networks. A major drawback to this camera is Nextbase’s poor integration of the battery. The battery’s inability to hold a charge long enough to make Photo Mode a useful feature can be considered a small drawback.

Overall, the Nextbase 312GW dashcam is a worthwhile upgrade to the 212 Lite model, delivering recording quality expected from more expensive cameras on the market. Effortless, hassle-free mounting and dismounting of the camera with the novel powered magnetic technology really gives this device an edge over its competitors, guaranteeing rapid install and storage for those constantly on the go.

Moreover, one clear advantage of having a Nextbase dashcam over other brands is its acceptance by some UK car insurance providers. Reliable performance and full integration of numerous in-demand features make Nextbase’s newest addition a knockout specimen, especially among its peers in the low-mid range £-££ price bracket, and making it into our very own Best UK dashboard cameras list.

Where To Buy The Nextbase 312GW Dash Cam

Founded in 2005 and based in Surrey, Nextbase is the industry-leading brand for in-vehicle entertainment accessories. They are well-known for their high-quality DVD players, tablets and dashboard cameras. According to GFK data, their range of dash cams is the most popular in the UK, dominating 56% of the market share in March 2014!

Released in 2016, the Nextbase 312GW dashboard camera is one of Nextbase’s flagship products and has received the “Best Buy” award from Sun Motors.

If you enjoyed our Nextbase 312GW dash cam review, be sure to check out other cameras reviewed from the Nextbase‘s established range.