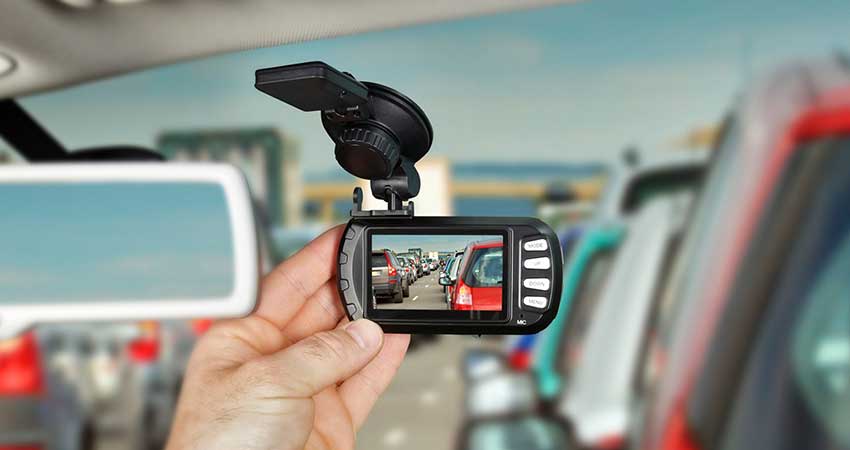 Built-In GPS: The GPS sensor records driver speed and location data from travels. When footage is played back on a computer, routes can be tracked alongside Google Maps™. If an accident occurs, drivers can provide police and insurers detailed information for reports and claims.

G-Force Sensor: When an incident occurs, the G-Force sensor automatically triggers Emergency Recording, documenting footage from before, during and after an impact or collision in an overwrite protected file for later review and analysis. In addition to Emergency Recording, the sensor detects if drivers yawed, braked and the actual force of impact.

Parking Mode: Parking Mode employs motion detection technology to automatically activate recording when sensors pick up activity or impact in front of the vehicle-even without a driver present. This feature can be particularly useful in the event of vandalism, or a hit and run situation while parked.

Photo Mode: In the unfortunate event of an accident, drivers can remove the dash cam from its mount and use it as a regular digital camera to document vehicular damage from the scene for police and insurers.

Large LCD Display: Play back footage directly on the camera without straining the eyes. At nearly 7 cm, the LCD screen is slightly larger than average dash cam screens available to the UK market.

The Nextbase 302G Deluxe dashboard camera is a budget-friendly recorder with average performance and specs. Video quality is nothing to rave about, especially when compared to cameras from competing brands and even Nextbase’s own line. However, the minimalist dash cam manages to include a few high-demand features, such as Loop Recording, Parking Mode and night vision recording. While the 302G Deluxe was intended as an upgrade to the brand’s 202 Lite model with the integration of GPS, the subpar navigational system fails to impress. Additionally, users frequently complain that the camera is difficult to remove from its mount, which can cause problems for those frequently mounting and dismounting the device from vehicles.

Overall the Nextbase 302G Deluxe is a budget product-no frills, just the basics to get drivers safely from point A to B. The lightweight build doesn’t interfere with the driver’s field of view, installation is simple and navigation through settings is user-friendly, making the device approachable (especially for the tech-challenged). Moreover, one clear advantage of having a Nextbase dash cam over other brands is its wide acceptance by UK insurance providers. But poor image quality, a limited viewing angle and lack of a truly functional GPS leave most users wanting more. This is all reflected in the poor reviews the camera receives on Halfords UK for example. We recommend potential buyers to check out other cameras in the Nextbase family, or a competing brand with comparable, if not better, features and capability.

Remember to check out how you can receive a discount on car insurance premiums with the Nextbase 302G Deluxe dashboard camera.

Where To Buy The Nextbase 302G Deluxe

Released in 2013, the Nextbase 302G Deluxe dashboard camera is one of many cameras in their ever growing range of driving recorders.

If you enjoyed our Nextbase 302G Deluxe review, be sure to check out other cameras reviewed from the Nextbase range.