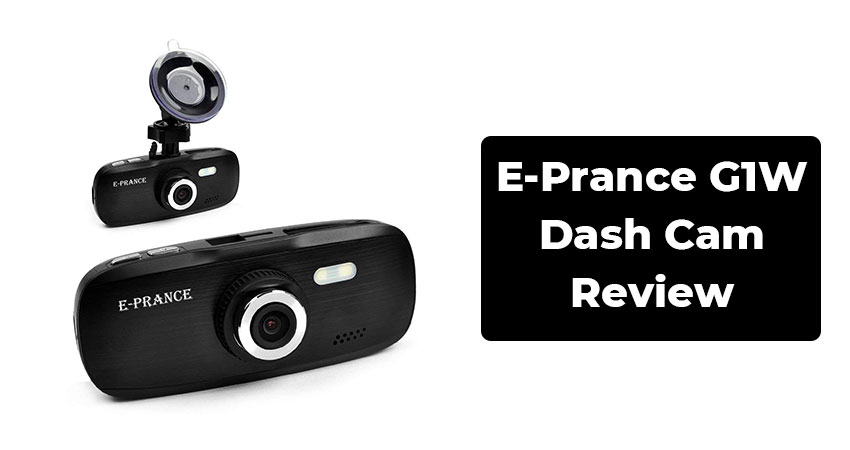 HD Recording: The E-PRANCE G1W combines Novatek’s premium NT96650 processor with an Aptina AR0330 CMOS sensor to deliver remarkable visual clarity, especially during daytime driving. The G1W records in Full HD, 1080p at 30fps, or HD, 720p at 60fps. Premium internal technology and the lens ensure crisp images with an acute attention to fine details, such as license plates and road signs. Its wide 140° angle lens captures much of the road and peripheral roadside events for broader coverage, ensuring nothing goes unnoticed. The addition of an IR LED boosts the camera’s ability to record in virtually no light, providing adequate footage during low and nighttime driving.

Emergency Recording: The 3-axis G-sensor activates Emergency Recording when a sudden bump or severe impact occurs. Footage recorded in this mode is saved as an overwrite protected file until further manual review.

Photo Mode: The built-in battery is a dedicated power source when drivers need to take pictures as evidence in the event of an accident. Photo Mode records stills as .jpeg files at an impressive 5 MP resolution thanks to the powerful Aptina AR0330 CMOS sensor.

Auto Power On/Off: Smart technology automatically activates the G1W once it detects the vehicle’s power source with a simple turning of the key or push of the ignition button, saving drivers time and ensuring they don’t forget to turn on the dash cam while traveling.

LCD Screen: The G1W is fitted with a 6.86 cm LCD display screen. The large screen serves drivers well, reducing eye strain when navigating through the settings menu or reviewing the recorded footage. Additionally, with the screen saver, the screen can be blacked out after three, five or ten minutes of inactivity for distraction-free driving at night.

***credit to Paul Gardner channel for this video***

***credit to SalesDriven channel for this video***

The E-PRANCE G1W brings must-have dash cam essentials to a budget-friendly price point that is sure to turn the heads of any prospective buyer. Pricing aside, the dash cam harnesses powerful internal technology, employing Novatek’s NT96650 processor in tandem with the Aptina AR0330 CMOS sensor for remarkable recording quality during daytime driving. The integration of an IR LED enhances low and nighttime driving, but not at a level on par with its daytime image quality.

Overall, the G1W is and does exactly what a dash cam sets out to do. E-PRANCE purposefully avoids extraneous add-on features (GPS, Wi-Fi, speed camera alerts) to focus on the camera itself and bring consumers a reliable, quality-made and affordable product. Other than a few consumer complaints regarding the dash cam’s aesthetics and difficulty with setting up Loop Recording, this is a perfect device for daily in-vehicle use and added safety assurance while on the road.

*Depending on package option purchased

E-PRANCE serves as the globally-recognized name for China Prance Industrial Co. Limited’s line of electronic and digital products. Founded in 2011, E-PRANCE is dedicated to establishing themselves as an industry leader in the eCommerce world with a full host of products—from in-vehicle electronics and accessories, to mobile and PC accessories.

The forward-thinking company values innovation and technological advancement for the modern world. Moreover, consumers will appreciate the high emphasis the company places upon customer service and satisfaction through innovating, manufacturing and delivering diverse, quality-made products.

If you enjoyed our E-PRANCE G1W dashboard camera review, be sure to check out other cameras reviewed from the E-PRANCE family.