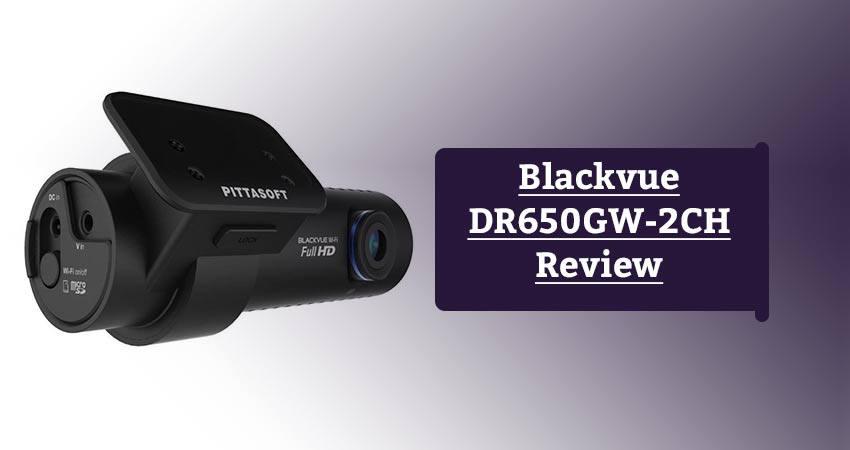 User Rating: Be the first one!

Front and Rear Camera: Unique to the BlackVue DR650GW-2CH UK is its unified front and rear cameras. The front camera records in Full HD, while the rear records at 720p. Each camera produces a fixed 129° field of view with minimal distortion; although, footage from the rear camera has a slight fish-eye quality. The DR650GW will record at three resolution levels, highest, high and normal.

The front camera provides brilliant imaging and vivid detailing from daytime driving with some glare. Due to the lower resolution of the rear camera, daytime driving footage is not as defined. However, surprisingly the rear camera performs quite well during low light and nighttime driving, capable of picking up fine details, such as vehicle license plates and road signs.

Real-time GPS Tracking with Route Visualization: Through the BlackVue App on a smartphone or tablet, drivers are able to access and track routes on Google Maps™. Essential data, including the direction of travel, speed, and geographical coordinates are synched from the dual-channel system and visible during video playback.

Impact/Event Recording: This mode is identical to “Emergency Recording” found on most dash cams. Employing its 3-axis G-sensor, Impact/Event Recording immediately records sudden bumps or severe impact. Files are saved automatically and color-coded in red for instant recognition and playback.

Note: While most dash cams store video footage from Emergency Recording as overwrite protected files, the BlackVue DR650GW-2CH does not. Drivers will have to use the BlackVue App to manually lock the file in the app or copy the footage to BlackVue’s proprietary “Over the Cloud” or a compatible device.

Wi-Fi and Live View: An integral aspect of BlackVue’s mission is creating products that keep users connected. The DR650GW dash cam includes Wi-Fi and connects to Android/iOS smartphones and tablets. These devices serve as the dash cam’s display, especially helpful while traveling using GPS. Wi-Fi can be turned on or off, according to user preference.

BlackVue’s Live View feature (part of the BlackVue App) allows users to remotely monitor activity around vehicles as a live stream from distances over 9 meters when connected to Wi-Fi.

Parking Mode: Motion detection captures movement and impact without a driver present. Files are color-coded in blue for instant recognition and playback using either the Live View/Remote Playback features through the BlackVue App on smartphones or tablets or BlackVue Viewer on the computer. Note: This mode requires a continuous power source, such as the Power Magic PRO Kit (sold separately).

Two-Way Audio: The innovative feature not only records in-vehicle audio, but it also enables drivers to speak directly to a connected smartphone or tablet for hands-free management of modes and settings on the DR650GW. The dashcam includes on/off control of recorded audio, capturing a supplemental source of evidence in the event of an accident.

LED Indicators: While the BlackVue DR650GW-2CH UK does not include its own LCD display, distinct LED indicators alert users to recording status, Wi-Fi connectivity as well as GPS activation.

360° Rotation: Drivers can rotate each camera within their brackets a full 360° for precision placement according to personal preference. Once installed, the sleek, compact design equips drivers with a security system that offers near-seamless integration with vehicle interiors for ultimate discretion.

BlackVue Software: BlackVue App, BlackVue “Over the Cloud” and BlackVue Viewer serve as an intricate system to keep drivers connected to their dashcam and what is being recorded at all times. The BlackVue App functions as the DR650GW’s display screen and acts as a portal to the add-on BlackVue Cloud and its array of safety-driven practical features.

BlackVue Viewer catalogs all recorded footage by day, hour, minute and even second as color-coded files depending on their initial recording mode (i.e. Normal, Impact/Event or Parking) for convenient access and retrieval. Video can be reviewed and played back with adjustments made to speed and zoom. Routes traveled are synched to Google Maps™ for detailed review in the case of an accident.

***credit to James Lee channel for this video***

The DR650GW is a noteworthy dual-channel flagship product from BlackVue. From its total front and rear visual coverage of vehicles, to practical safety features all accessed from the palm of your hand to its polished cylindrical form, BlackVue demonstrates their understanding of what it means to be a competitive force in the contemporary dash cam market.

The BlackVue DR650GW-2CH UK thrives in forward-thinking innovations that make-use of smart technology outfitted with a savvy app to eliminate the need for a display altogether. With a smartphone, drivers have access to GPS data, can view parked vehicles remotely, receive vehicle monitoring alerts based on custom presets, transfer/save footage to BlackVue’s signature Cloud as a backup, among other nifty practicalities.

However, the camera’s basic hardware and functionality lag behind the creativity of its software. A major disappointment is the inconsistent quality of recorded video despite the impressive Sony EXMOR CMOS sensor. The Full HD front camera performs well in daylight (if you can get past reflections in the windscreen), but not as well in low to nighttime driving conditions with headlight beams obscuring details. Meanwhile, the HD rear camera produces noticeably lower video resolution during daytime driving, but surprises at night, easily capturing license plates. The adequate video resolution carries over to Photo Mode, providing mediocre picture quality with 2.4 megapixels being the highest resolution. Another setback regards Impact/Event Recording (Emergency Recording). Footage recorded in this mode is not saved automatically as an overwrite protected file. Users will have to remember to lock the file from the BlackVue App or upload the file to the Cloud or computers for safekeeping.

The major selling point of the BlackVue DR650GW-2CH UK dash cam is its smooth integration of front and rear cameras, giving drivers full coverage of vehicles while on the road or parked on the street—something that is truly hard to beat, and why it makes it into our Best Front and Rear Dash Cam list.

Dual channels, satisfactory video quality, accurate GPS tracking, a user-friendly file managing system and a companion app loaded with a host of features make the DR650GW a fun device for the early-adopters, but not quite worth the investment for the mainstream—not yet.

Where To Buy The BlackVue DR650GW-2CH UK Dash Cam

Founded in 2007, Pittasoft aims to impress with dashboard cameras that deliver the combined strengths of vivid image quality and maximum connectivity to smart devices. Pittasoft paves the way in the industry with groundbreaking work in one and two-channel Full HD dash cams, living up to high standards of product manufacturing and their philosophy—Reliable. Simple. Connected.

If you enjoyed our BlackVue DR650GW-2CH UK review, be sure to check out other cameras reviewed from the BlackVue range.