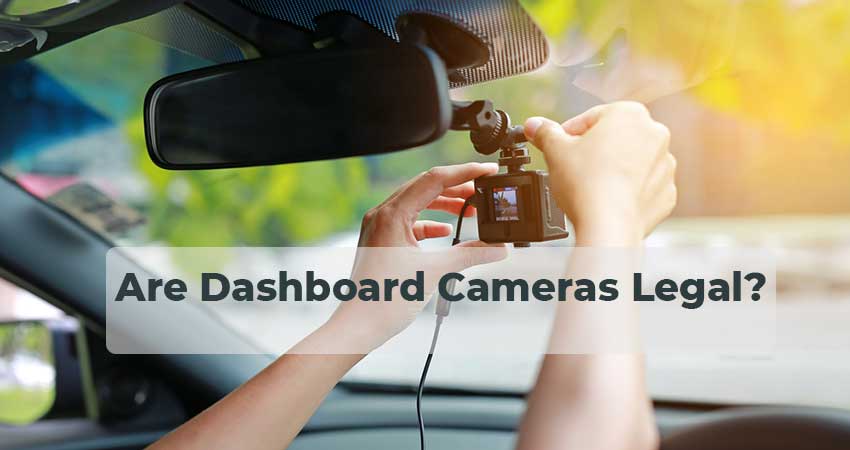 Dashboard cameras have become increasingly trendy these past years, as it’s a tool used for fun and/or to record evidence in case of an accident. They come with different features and can be very handy when a crash occurs, as it will easily be proof of who’s responsible, and can now even get you a discount on your car insurance.  But one big question still comes time and time again all over the world, are dashboard cameras legal?

First, What Exactly Is A Dash Cam?

This in-car camera is a little device you can mount on your car dashboard, windscreen or anywhere else in your car, as long as it doesn’t obstruct the driver’s view. You can attach them with either suction cups, a bracket or a sticky pad. They can be connected to your vehicle’s electrical system, using your cigarette lighter socket, or be hardwired-in for a more permanent solution. Check out our installation guide on how best to install/fit your dashboard camera. The main difference from a normal camera is that they instantly start to record when your car is in motion. One of the first questions that people ask when considering one of these devices is, are dashboard cameras legal?

What Are The Benefits Of Using A Dashboard Camera?

Cyclists have used helmet cams for years, to record crashes and incidents with other road users, which are then used as the basis for police complaints against negligent drivers. Dash cams are mainly used for the same purpose. In fact, many drivers are using them to record their journeys, as the video footage can be shown to the police and court to prove a car accident was not your fault.

Installing a dash cam in your car can also protect you against fraudulent insurance claims, and you can save money on your insurance premiums, as the camera does not lie. For instance, Swiftcover offers 10% dash cam insurance discounts, as they assume that drivers who have a dashboard camera for accidents are more likely to drive cautiously.

What Features Do They Offer?

There are many in-car cameras available on the market today. Based on your needs, you can choose from a simple front facing cam, to a unit that features both forwards and rear-facing cameras. Some models also have a built-in GPS system, which will not serve as a navigator, but instead record your coordinates, which will be handy if you have to reference the location of a crash. Some cameras also have a built-in display, but this is mainly a personal requirement.

Most entry-level dash cams simply record when your vehicle is moving, but some also record when it is parked, making them useful in case of vandalism or theft.

Finally, the cams vary greatly in terms of recording memory, which translates in their price. Entry-level dash cams start at a price of £15, up to more than £580 for the most advanced ones.

Are Dashboard Cameras Legal In The UK?

The increasing number of dashboard camera videos posted on social networks have led to many complaints, so it is reasonable to ask yourself, are dashboard cameras legal? Unfortunately, the question isn’t as simple, as it’s really a question of ethics.

In the UK, they are legal, and indeed highly desirable to have, as the police will review the footage in case of an incident, and it is usable in court. As long as it doesn’t block the driver’s view, and it’s not used to intrude upon someone’s privacy, it is legal to have it installed in your car. As there is no ‘reasonable expectation of privacy’ on public roads, a footage of how someone drives on the road can be of public interest if there is a crash.

Are Dashboard Cameras Legal In Other Countries?

In the US and Australia, there are no federal laws against recording video with a dash cam. However, it is illegal to use it to record a conversation in your vehicle, if all the participants are not aware of it.

In Europe, the restrictions on the use of dash cams vary from one country to the other. For instance, in Austria, privacy laws are so strict, that even Google Street View is banned. In Germany, you have the right to own and use a dashboard camera, but it’s illegal to post footages online. In France, however, it is completely legal.

Privacy debates are going on in other parts of Europe, and the law surrounding dash cams is always changing, so take some time to research whenever you plan a driving trip abroad.

*Note: As laws are always changing we ask that you always check out your local laws, and ask an expert if you are unsure. We do not claim to offer legal advice, and a professional should always be contacted for full clarity*

Now with all that being said, let’s check out how to look for the best dash cam.